Santa Barbara’s coastline has something for everyone. Whether you want to ride the waves, search for starfish or simply watch the sun set over the ocean, you’ll be sure to find the perfect beach for every adventure you can imagine. (Santa Barbara Beach Directory) 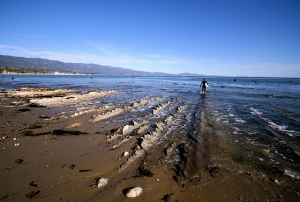 You can spend an entire day swimming and sunning on any of the beaches in Santa Barbara, but locals tend to spend sunny days at Arroyo Burro/Hendry’s, where you can people-watch, grab a drink and something to eat at the Boathouse or take a stroll down the beach in between swims. Other favorites include Butterfly Beach, Leadbetter and East Beach where the sand stretches as far as you can see.

Rincon Point is known as the “Queen of the Coast,” and is one
of the most famous surf spots in all of California! Low tide
winter swells from the west and northwest bring the best surf
you can ask for, with perfectly formed waves and long rides. 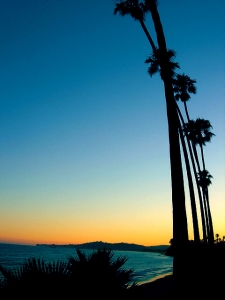 Butterfly Beach has easy after-work access to catch the sunset at the end of the day on the ledge overlooking the sand, while Hendry’s offers a nice place to take a stroll and unwind while the sun gently fades away on the horizon.

Hendry’s is well-known as the local “dog beach,” since it is the only official beach in Santa Barbara to allow dogs to run of-leash. During low-tide the beach is the perfect place to let your dog run, play a game of fetch or carouse with other dogs.

If there’s a wave, ride it! We like Loon Point for its consistent shoreline break, Leadbetter for ease of access and Summerland for their usually empty beaches.

The Santa Barbara and Goleta Piers are full of fishing excitement, where you
can often see anglers catching bass, halibut, rockfish and even the
occasional shark or stingray. 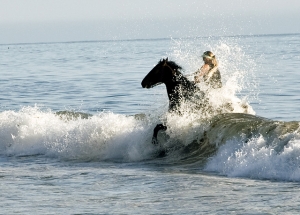 You’ll often find equestrians riding their horses between Padaro Lane and Rincon Point, or if you’re interested in saddling up yourself there are several outfits north of Santa Barbara around El Capitan Ranch.

Low tide in Santa Barbara offers a glimpse into our underwater world that is teeming with starfish, sea anemone, mollusks and other marine life that usually lies hidden beneath the sea. Some of the best tidepools are at Leadbetter, Hendry’s, Campus Point and Rincon Point in Carpinteria. 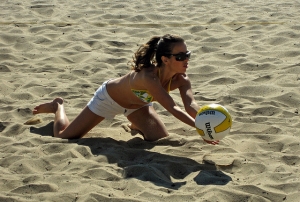 There are permanent courts set up at both East Beach and West Beach, where you are sure to find a game going to watch or join in on!

Let us know your favorite beach activities in the comments!

SBMerge is live and back in action with a new, responsive design! We're shifting focus…

The Public Market will showcase the best our land has to offer and the uniqueness of our local flavor.