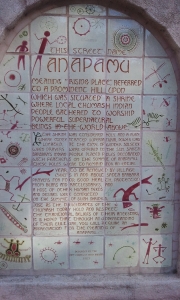 This street name “Anapamu” meaning “Rising Place,” referred to a prominent hill upon which was situated a shrine where local Chumash Indian people gathered to worship powerful supernatural beings in the world above.

The shrine was considered holy and a place where concentrated supernatural power was located. At the time of winter solstice when prayers were offered to the sun, Santa Barbara’s Indian people placed poles decorated with feathers on the summit of Anapamu. These poles were to remain for an entire year, to be renewed by village chiefs in and about Santa Barbara.

Prayers for food, good health, protection from bears and rattlesnakes, and a host of other human needs and desires were conducted on the summit of such shrines. Just as the descendants of the Chumash today hold and respect the traditional beliefs of their ancestors, it is hoped that through an understanding of their culture, you will acquire an appreciation for the meaning of Anapamu.

Historical tourists will find Santa Barbara an interesting place to visit, with its many ancient architectural gems interspersed throughout the city. Most of the sites blend so nicely into the landscape that you might not even realize that they're on the National Register of Historic Places!